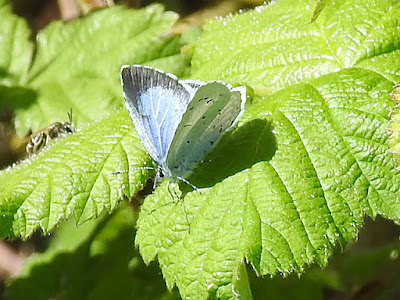 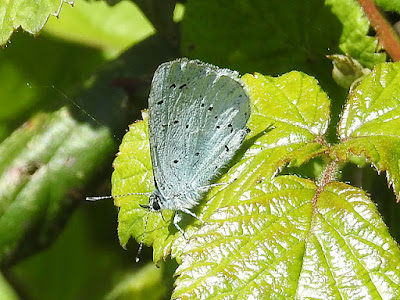 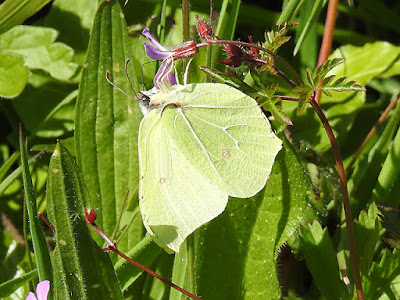 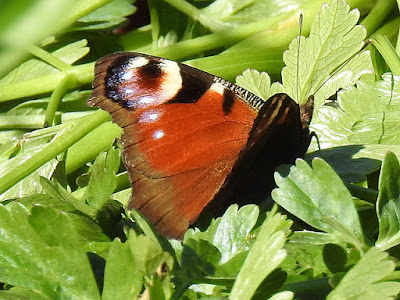 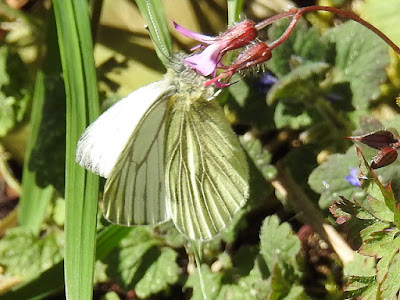 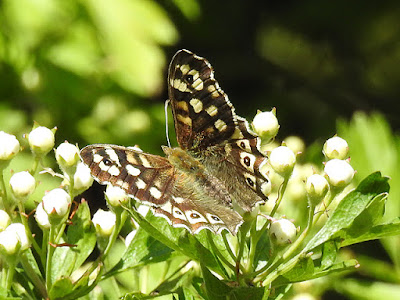 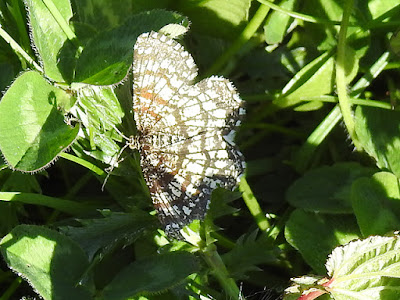 Beetling by the Taff

Shingle and gravel banks by rivers (or Exposed Riverine Sediments, ERS, to give them their proper name) can be rich in specialist invertebrates, beetles in particular. Many of the species also occur in other wetland habitats, but some are confined to ERS. The fauna of the Wye and the Usk is known to be very rich, the Taff less so - perhaps due to greater industrialisation and urbanisation, or maybe just reflecting difference in habitat.

I've poked around on the Taff-side shingle banks in Cardiff, turning stones to look for beetles, but haven't done anything systematic like pitfall trapping. Nevertheless, some nice species have been found which I've not seen elsewhere in Cardiff.

There is a nice shingle bank on a bend in the Taff at Hailey Park (ST139796) which was alive with the shiny blue-black ground beetle Bembidion atrocaeruleum yesterday. Bembidion is the largest genus of carabids in the UK, and often presents identification challenges, but this one keyed out satisfactorily. According to Aderyn it is the 4th most common Bembidion in Wales, and is a specialist of riverside and streamside habitats. Also present under stones were several individuals of the small but attractive click beetle Zorochros minimus - another specialist of river shoals and one which has a north-western distribution in Britain.

Many generalist ground beetles can be found too, particulaly species prefering damp habitats. Slightly further downstream, in May 2015, I found Amara ovata, Paranchus albipes, Pterostichus madidus and Bembidion tetracolum on gravel by the Taff. None of these are thought to be ERS specialists, though some like P. albipes are wetland species found mainly by rivers and streams.
At Llandaff Weir Ocys harpaloides was recorded, and in Bute Park the common generalist carabid Notiophilus biguttatus was in similar ERS habitat.

Certainly a habitat that is worth exploring...
Posted by GMT at 07:08 No comments:

A nice bright and warm day Sunday with a few butterflies making an appearance around the park, a few male Brimstones patrolling the hedgerows with a Comma and a couple of Small Tortoiseshells enjoying the sun. 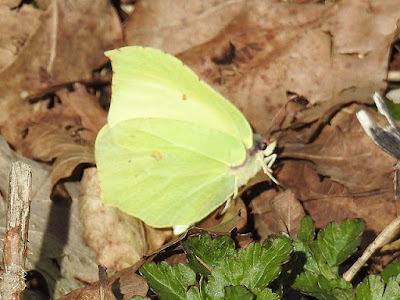 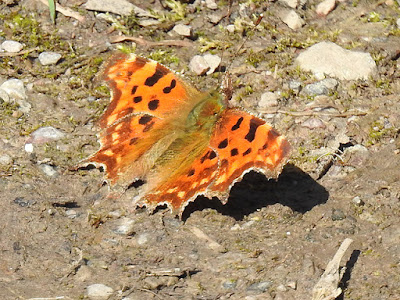 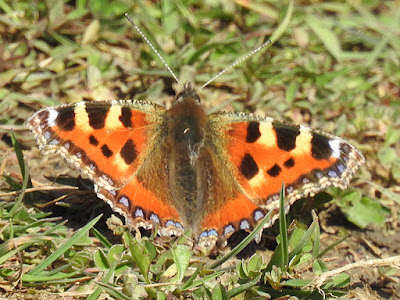 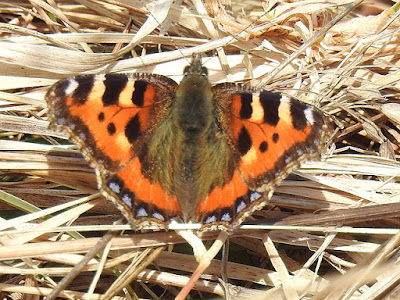 At the dragonfly pond to the left of the visitor centre there was an unwelcome guest in the form of a Terapin basking near the bank. 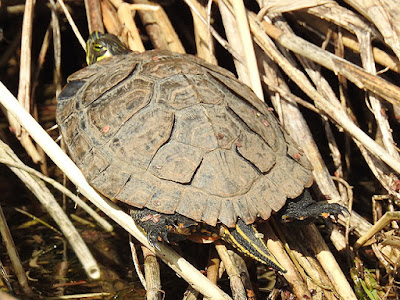 All around the pond there were Common Frogs looking for mates plus one or two already mating, there was a single patch of frog spawn in the pond but it looked like it had been killed off by the cold weather we have had as there was no movement from within. 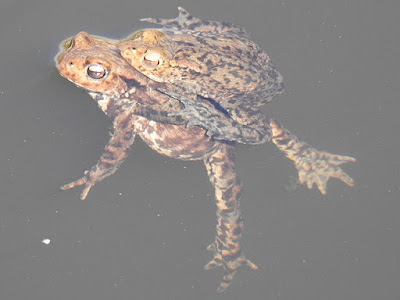 Posted by Mike Thornton at 19:08 No comments:

First 2018 sighting of a caddisfly in the garden - attracted to the moth box last night. Grateful if anyone can point me in the right direction with this. I have attached an image of the underside as I know these are very difficult/impossible to ID without genital examination. Does this image provide sufficient detail ? 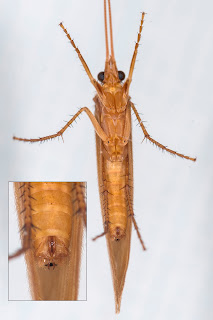 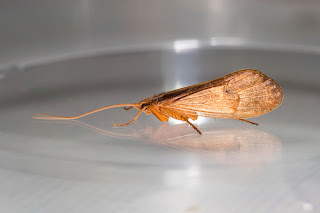 Another spider query - found this beastie (approx 10mm) on the ceiling in the utility room last night. Not seen one like this before and wondering, with that 'furry' grey abdomen, whether this could be a Mouse Spider (Scotophaeus blackwalli). Aderyn isn't showing many of these near me so would be grateful if anyone could confirm ID.
The grid in the first image is 2mm. 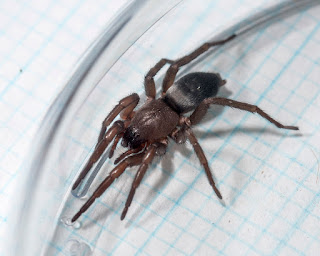 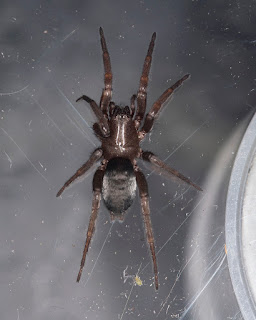 A follow-up to my previous post. The Oak Marble Gall that I picked up in the Coryton interchange last week revealed its secret this morning. I found a neat little hole in the gall and a little wasp in the pot. I assume this must be an Oak Marble Gall Wasp - Andricus kollari. (the grid is 2mm). Always wanted to see one of these gall wasps. 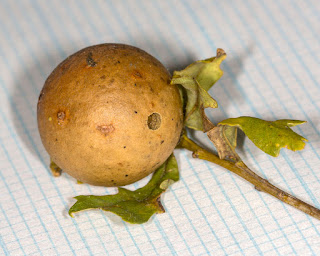 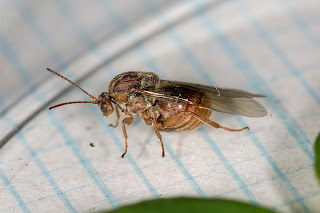 Came across these whilst strolling through the Coryton interchange. I'm fairly sure the first is a Common Spangle oak gall, but is the second an Oak Apple gall or an Oak Marble gall ? Grateful for any guidance on this - it was still attached but fell off when I touched it. There are no exit holes that I can see. 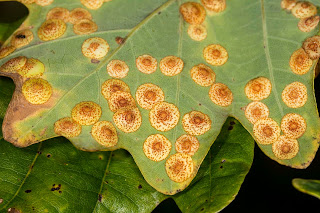 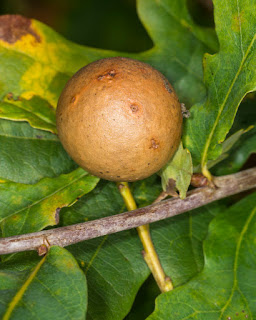