A Stroll in the Woods

This morning, before the rain arrived, I paid a quick visit to a wooded valley near Llwydcoed. I was looking for microfungi and found several, most of which remain to be identified. One of the handful I I knew was Glyphium elatum.

One of the non fungi was the distinctive alga Phytopeltis arundinacea, microscope shots of which I have previously posted on this site. This time it was on ivy leaves.

I was extremely pleased to find this Green Elf Cup (Chlorocyboria aeruginascens) growing on a rotting Ash trunk. I've seen it on this particular trunk a couple of years ago, but this time the cups were in prime condition


I also came across some of that or another Colletotrichum (Anthracnose), as featured in my previous post, this time forming patches on the surface of an ivy leaf. I'll post more about this when I've looked further into it. Thanks again to Howard and George for pointing me in the right direction.

A visit to the North Cardiff ridgeway during the brief cold snap last week (remember it?) revealed several rather beautiful patches of 'hair ice' on dead wood in a sheltered valley. 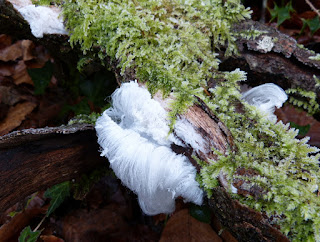 I was with a few others but none of us had seen this before, though we'd all recently read about it in connection with the cause of this strange phenomenon. It turns out that it was as recently as 2015 that the mystery was solved. A team of German scientists analysed samples of wood from beneath hair ice and found one fungus species common to all of them: the crust fungus Exidiopsis effusa. An online article (see here for link) provides this explanation for the mechanism involved:

"Liquid water near the branch surface freezes in contact with the cold air, creating an ice front and sandwiching a thin water film between this ice and the wood pores. Suction resulting from repelling intermolecular forces acting at this wood–water–ice sandwich then gets the water inside the wood pores to move towards the ice front, where it freezes and adds to the existing ice,” the scientists explained"

I think I can just about get my head around that!

I've since heard that there is some dispute about whether E. effusa is the sole causal organism, but that just complicates an otherwise neat story!
Posted by GMT at 20:59 1 comment:

A few days ago, I took a stroll up the lane behind our street, looking for microfungi to try and identify. Passing some shaded Cherry Laurel, I noticed what I took to be an algal coating on their upper surface and with almost no hope of an identification, I collected a specimen.

At home, I moistened the coating and carefully scraped some off to mount on a microscope slide. Even under low power, I could see what looked like dark awl shaped hairs sticking up from the surface of mass of algal cells. At first I wondered whether the hairs could have come from the leaf itself, even though I wasn't aware that Cherry Laurel leaves had any. A quick check of a portion of the leaf without the alga revealed absolutely no hairs, so I am left with the conclusion that the apparent hairs are in some way connected with the alga.

I doubt whether I will ever find out what the alga is, assuming it is and alga, and I am not fishing for an identification, but does anyone know what the 'hairs' are and what is their function?

I have a willow tree in the garden and have recently noticed that there are things growing on the undersides of a couple of the branches. The first branch is approx 4 inch diameter and the second is approx 1.5-2 inch diameter. No idea what they are, although the white patch looks more lichen-like than fungus. Haven't managed to find anything similar so would appreciate some pointers. 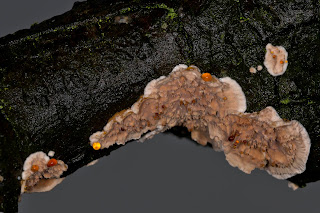 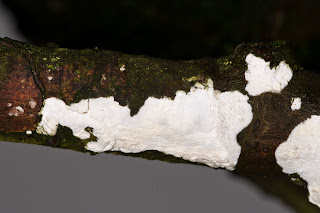 Out walking in a very wet Creigiau woods and quickly discovered that nothing else was stupid enough to be venturing out in the pouring rain - the sky was clear when I left the house! - but the colourful patches on the trees and rotting wood caught my eye. I know very little about fungi so have no idea what they are, but some were colourful and others were just odd. They may not even be fungi.

Like this jelly-like stuff - only seen on a single tree by the side of the path. 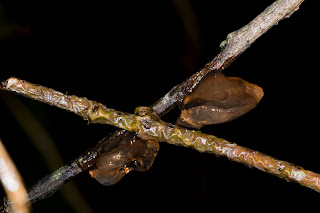 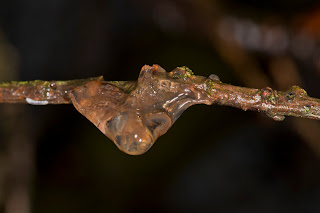 or these odd patches of colour 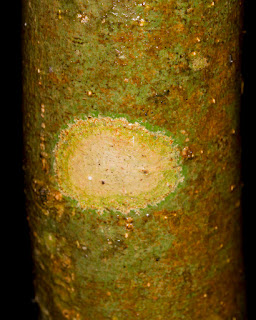 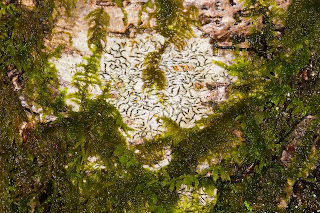 Is this one a 'beefsteak fungus'? 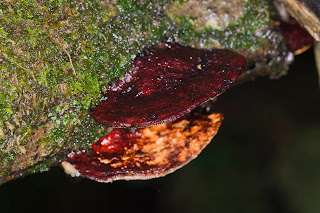 This little patch was tucked under a log, almost as though sheltering from the bad weather, 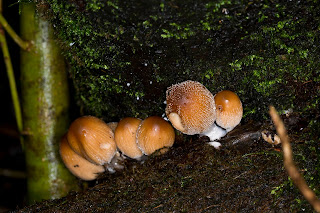 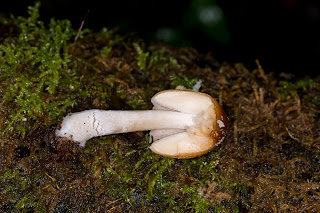 and there were lots of these slimy, shell-like brackets. 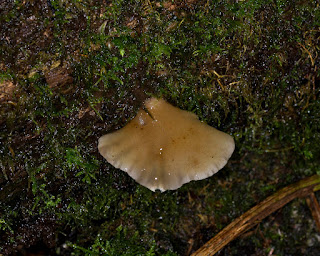 Finally, as I was leaving the woods, I saw a log that was completely covered with these 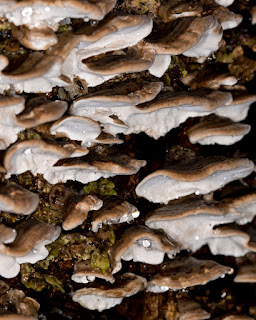 An enjoyable outing .... even though I didn't a single name to go with anything that I'd snapped pictures of!
Posted by Howard Burt at 00:03 4 comments:

Found this on the decking this afternoon. Looks like it may be of the Cryptopidae family but it seems to have lost it's back-end! Two legs on the right-hand side and the final segment with the backward-facing pair of legs appear to have gone astray.

I have been interested in rust fungi for a while now, but the search for them has led me into, taking an interest in other microfungi, a group which includes rusts, mildews and soots, but also things that look like miniature versions of the fungi we are all familiar with. It is a world that requires hand lenses in the field and microscopes at home, as identification often comes down to studying the spores (more interesting than might be imagined). Often the view down the microscope is breathtakingly beautiful, but can be frustrating too. Winter isn't the best time to go looking for specimens to collect for study, but there are some to be found and with them can sometimes come bonus species, such as this epiphyllous alga, found while searching the leaf litter beneath a shaded Laurel. The tiny dull olive disks of it were scattered over the upper surface of the fallen leaf. At home I found they pealed off readily and were easy to mount on a slide, but very difficult to do so without trapping air bubbles on or against them.

I am a raw beginner at this and the vast majority of microfungi are still beyond me, but the more obvious and distinctive ones can often be tackled successfully, particularly as many of them are host specific. Back in 2013, when I was actively square bashing Cobalt Crust fungus and searching the deepest recesses of Sallow thickets, I often came across what looked like a coarse, black stubble, on dead twigs and branches of the Sallows. Through the hand lens, I was intrigued to see that the tiny fruiting bodies which made up the stubble were shaped like minute chisels or perhaps more like Neolithic polished flint axe heads (up to 2mm long), sticking up from the surface of the bark or wood at various angles.
Since then I have tried to identify them, but without success and even when I bought the Bible of Microfungi: 'Microfungi on Land Plants' by Martin and Pamela Ellis, I was disappointed when I was unable to find it under Salix (willow Spp).
Googling 'Microfungi of Salix' got me nowhere either, until New Year's Day. As I poked around in Dare Valley country park, I came across this fungus again and collected a specimen to examine under the microscope and when I got home I tried an web search again, but this time, armed with a little more knowledge of types of microfungi, I searched on 'Ascomycetes on Salix' and bingo, there were loads of pictures of it.
At last, I had its name: Glyphium elatum, so was able to go back to the book and look it up. According to the Ellis's, they have only ever seen it once, on Honeysuckle in the Channel Islands, though they mentioned that it also occurs on other woody species, it is listed under Honeysuckle in the book, which is why I failed to find it in there the first time
. They regard it as rare, but around here, it is fairly common on Sallow and I seem to recall seeing it on dead Wych Elm too. Either way, I think I now have my new square bashing project for this winter.

Above is my first attempt at a stereo pair of Glyphium elatum, which I made by photographing the specimen through the left, then the right eyepieces of my stereo microscope on x20 and then stiching the cropped images together.
If you've never viewed one of these before, you need to fix your eyes on the central join and cross them until the two halves merge into a central 3D image. It takes a little practice, but worth it, even if my effort isn't as good as I'd hoped. You will probably need to click on the photo to open it first.
If you want to see some really excellent stereo sets of Glyphium elatum, take a look here.  http://www.eboehm.com/glyphium.html

daffodils in flower on 02 Jan

This is a very strange winter. I've recently seen daisies and buttercups in flower in the garden but today there are daffodils in flower on the roadside verge where Cardiff Road, Creigiau joins the A4119 !
Posted by Howard Burt at 17:00 3 comments: