I took this image in the flower bed last October. At the time I was trying to get pictures of a striking looking ichneumoninae and thought it was one of the red ants that I have in abundance in the garden so grabbed a record shot and carried on with what I was doing. Looking at it now, it doesn't seem to be an ant at all - head/eyes don't look right and there is no longer first segment on the antennae. No wings ... so I'm very puzzled.  Grateful if anyone can point me in the right direction. 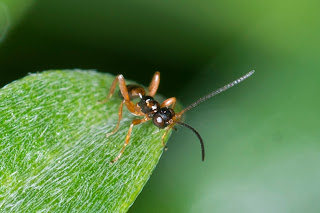 This has now been confirmed by Gavin Broad on UK BWA Facebook Group as Gelis sp - one of the wingless ichneumonidae.  Aderyn shows no Welsh records for this family so is this a first Welsh record ?
Posted by Howard Burt at 17:30 1 comment:

I was surprised to see two clumps of frogspawn in the garden pond today - but I probably shouldn't have been as our resident frogs seem to be spawning earlier than they used to. We've been here 10 years and the last three years have seen the earliest spawning dates, with 2016 being the earliest (1st Feb). In earlier years the first dates ranged from 14th Feb (2013) to 27th Feb (2010 and 2012). 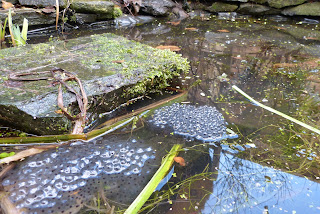 I'm not sure this relates to mild winters - we had several of those in the earlier years here, and January of this year was pretty chilly. Perhaps just part of a general trend to earlier spawning.
Posted by GMT at 20:03 No comments: