One of the neighbours commented recently that he hadn't seen any wasps in the garden this summer - that, of course was the 'kiss of death' as each moth trap since that conversation has contained at least three/four wasps! Both Common and German wasps have made an appearance - fortunately they seem to be very dopey early in the morning so are relatively easy to  'eyeball' to tell them apart.

I spotted some new visitors to the garden this afternoon - I think they were Tachinid flies, but I don't know which one. Quite large feeding on Shasta Daisy. 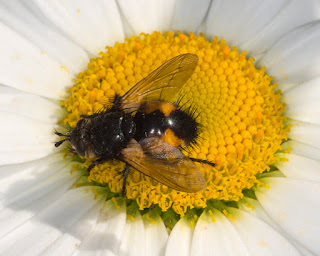 Wandering around in the forest to the north of Llwydcoed, in the Cynon valley, yesterday, I came across this delicate looking cocoon on a leaf of Curled Dock. Inside the net-like cocoon a larva or pupa can be made out. There was no sign of feeding damage on the dock, so this may not be the food plant. I have a feeling it may be a beetle, but actually I have no real idea. Any ideas? 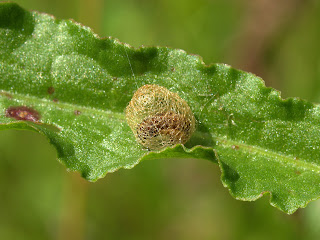 Creigiau - flies (& friends) in the sun

Amongst the usual suspects seen during a short stroll in Craig y Parc woods & meadows a couple of interesting looking flies turned up, both new to me.


This trend continued when I returned to the garden - lots of bees, hoverflies & other 'flies', but some that I didn't recognise at all and I still haven't managed a definite ID for two of them.

Noticed a lot of Harlequin ladybird larvae in the garden recently, so put one in a pot to see what would happen. Quite an interesting transformation during the first couple of days and then the wait for the ladybird to emerge. Doesn't yet have the bright red case and the spots are barely visible, but I assume it will get there soon. 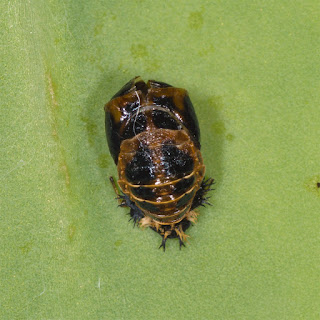 This is a very belated post; delayed by the need to revisit the site in question and verify things with people of more expertise than me.

Having run my moth trap for the bioblitz, at Gwyl Taf nature reserve,  Edwardsville, near Merthyr Tydfil, on the 11th June, I took a couple of micro moths home for a closer look and then on the morning of the 12th, took them back to the site to release and photograph them. Having had only 90 minutes sleep, I didn't stay there long, but took a few of photos of some things I noticed, including a dark, bluey green planthopper.

With the photos up on the computer, I went onto the British Bugs website to try to identify the bug, but the only one that resembled it at all and in fact was a close match, was Sonronius dahlbomi. Checking the distribution, it seemed that there  were no records for Wales, the main distribution being confined to the central belt of the country, from the South coast to the north east.

I contacted the authors of British Bugs and received a reply from Joseph Botting, who agreed with my identification and said that he finds them at a site in Llandrindod (Welsh records after all). The given foodplants are Willowherbs and Raspberry, but Joseph was finding his on Hogweed, as were a couple of German experts he was in contact with, so he asked me if I could perhaps revisit the site and look for nymphs, to try and establish an association with a particular foodplant at my site.
On the 21st June, I managed to find the time to pay the site a visit and quickly found both adults and a small number of what I thought were probably the nymphs of that species (none illustrated on the British Bugs website) and as I had not been asked to collect specimens, I just took photos and made notes.
The nymphs were found on various plants, including Rosebay Willowherb, Raspberry and Bramble. I searched for Hogweed, but there didn't appear to be any on the site. Having spent a couple of hours searching the vegetation at the original site, I saw more Raspberry and Willowherb growing fairly close by and closer to the river Taff, so I wandered down there and found a path with mainly bracken on one side and a mixture of Bramble, Raspberry, Rosebay Willowherb and some bracken on the other, but immediately bordering both sides of the path were lots of small plants (up to 20cm tall) of Himalayan Balsam, and it was on these that I found dozens of adults and nymphs of S. dahlbomi. I checked the Raspberry, Bramble and willowherb, but found none on them. It was obvious, that where Himalayan Balsam was present, S. dahlbomi preferred it to whatever else might be on offer.


A discussion ensued between Joseph Botting, Tristram Bantock (British Bugs) and Alan Stewart, the national recorder for this group, about food plant preference and habitat requirements, the conclusion bein that it is prbably fairly polyphagus, with habitat being more important, as it seems to prefer damper sites.

So Sonronius dahlbomi: new for VC41 and only the second known site for it in Wales. Not bad for a quick photo, taken on a bleary visit.

As a bonus, while searching for S. dahlbomi nymphs, I came across this nymph of Speckled Bush Cricket, the only cricket I have ever found up here in the valleys, which is a little puzzling.

Found a 'mesh' covered pupa on the underside of a leaf and put it into clean pot to see what emerged. As the plants had shown lots of 'cuckoo spit', I was expecting a spittle bug but found a parasitic wasp in the pot. I guess this happens a lot! 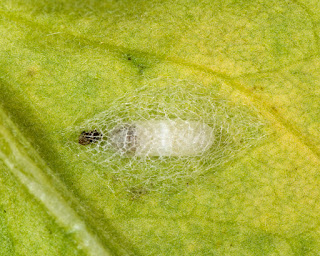 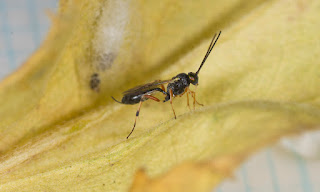 The pictures are a week apart, and the empty pupa can be seen behind the wasp in the second picture.
Posted by Howard Burt at 18:23 No comments:

Found a few bugs at Penarth and Parc Slip yesterday and would appreciate a few pointers please. Are these first two Notostira elongata (apologies for the quality of the photos...)? 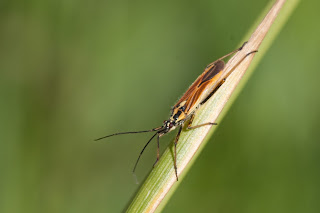 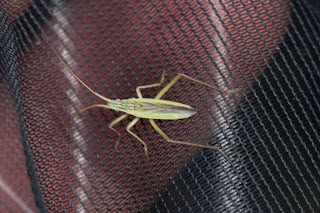 Can't find a match for this one: 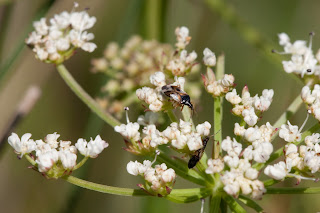 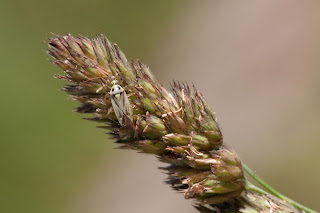 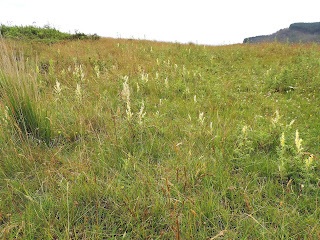 Following on from Marks post, I noticed many
Thistles infected on Mynydd bach, Maesteg today.
This is one of three images I took and I estimated
that around one in eight plants were affected.
Posted by Paul Parsons at 16:03 4 comments:

Other insects in the moth trap

Moth traps should probably be called something else, as they usually attract more flies, caddisflies and other insects than they do moths. This is particularly true on warm sticky nights, when lots of insects seem to be on the move and some of them turn up unexpectedly in light traps.

Last Friday night was one of those warm nights and produced a good range of insects in my garden MV trap in Llandaff North. As well as lots of caddisflies and numerous small flies were the lacewing Cunctochrysa albolineata (4 individuals), the beetles Lagria hirta (4) and Orange and Harlequin Ladybirds, and the hemipterans Aphrophora alni, Deraeocoris flavilina and Stenotus binotatus. Several of these had not been seen in the garden previously and probably wandered in from some distance away - for example, the beetle Lagria hirta is usually coastal and is associated with sandy soils. 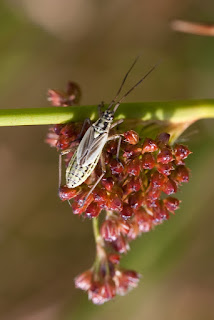 And is this attractive caddis Mystacides niger? 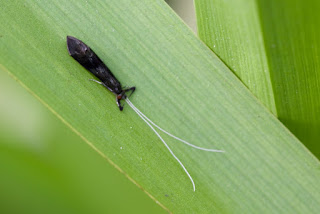 Apologies for the quality of the photos - my only excuse is that it was very windy...

Called in Parc Slip last week and was very fortunate to witness the emergence of a Four-spotted Dragonfly from the pupa. As is always the case, I didn't have the right lens with me but took pictures with what I had and hoped for the best. I have attached a set of photos, of variable quality, of the whole procedure as I saw it. The first image was taken at 10:51 and the final one at 12:31.

One of nature's wonders and a privilege to watch. 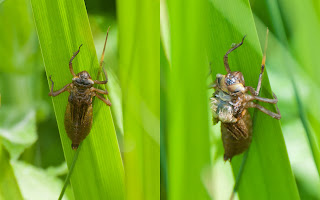 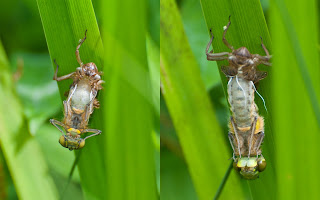 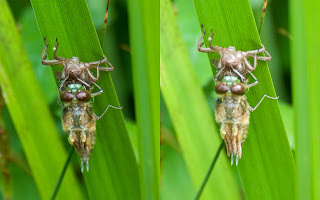 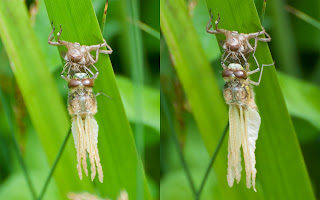 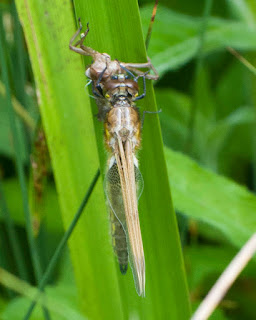 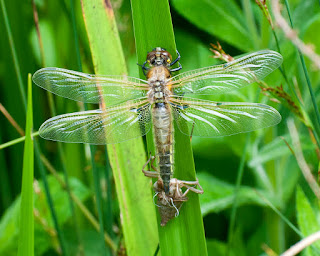