Taking a walk on Kenfig beach today, ambling along the new strand line being created and moved forward by the incoming tide, I noticed a rough looking medium size seed. On examination, it was obviously dense, hard and covered in uneven wrinkles. It is around 22mm long and 25x30mm wide.


As far as identification goes, the prime suspect, at the moment is Juglans nigra (J. neotropica is far less likely), the Black Walnut of Eastern North America, the range of which includes Florida, and large numbers of its seeds to find their way into the gulf of Mexico and the Gulf Stream, then potentially to our shores, via the North Atlantic Drift.

It is also grown as an ornamental tree in larger UK gardens, parks and collections and it is possible that this one originated here, but as Black Walnut seed can remain buoyant in salt water for up to fifteen months and they are known to be carried by the Gulf stream, in large numbers to the beaches of the Eastern seaboard of North America, it is just as possible that this is a true long distance traveller.
As I write this, I can see a Coconut I picked up at Kenfig a few years ago. It bears all the hallmarks of one brought here by the Gulf Stream. It is small, the nut is about the size of a cricket ball and still mainly enclosed in its coir husk, which is covered in tiny holes, made by insect larvae burrowing through it. The nut itself has the chalky tube of a Serpulid worm, proving it had been at sea for some time.

A rare Glamorgan fern at Tonyrefail

December isn't exactly the busiest month on the field botanist's calendar, but just occasionally it turns up something as interesting as any summer month!

A couple of weeks ago, a circular walk from Tonyrefail in the late afternoon gloom took me past a bank on which was growing an odd-looking fern, with the overall appearance of a small Lady Fern (Athyrium filix-femina) but with the more leathery leaves and linear sori (groups of spore-cases) characteristic of the spleenworts (Asplenium spp.). A return visit and closer inspection confirmed my initial suspicions, that this was the county rarity Lanceolate Spleenwort (Asplenium obovatum).
﻿﻿﻿﻿ This somewhat obscure species is most closely related to Black Spleenwort (Asplenium adiantum-nigrum), from which it differs in the smaller, paler-green fronds that taper at both ends, the shorter petiole, and the blunter pinnules.

﻿﻿
The plants were growing on a lightly-vegetated south-facing retaining bank, with plenty of exposed stone. I'm familiar with this species from West Devon, where it is local in exactly the same habitat. The Tonyrefail population seems to be quite healthy, with over 40 plants of various sizes.
﻿﻿﻿﻿﻿﻿
Asplenium obovatum has only ever been known from four sites in Glamorgan. Of these, only two seem to be extant - one at Penmaen in the Gower and another localised only to ST19M (jointly Glamorgan & Monmouthshire)... so it was a nice botanical 'Christmas present' to add another site to this list!
Posted by Unknown at 21:55 1 comment: 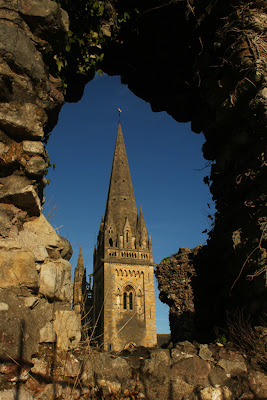 During an amble around Llandaff Cathedral yesterday a total of 29 species of bryophyte were noted on the walls, masonry and between the cobbles. The list included two noteworthy calcicoles, Curving Feather-moss Scorpiurium circinatum and Shady Beard-moss Didymodon umbrosus, both in the more humid habitats around the base of the cathedral walls. Unfortunately I never took any photos in situ, but for the record below is a pic of Shady Beard-moss taken under the microscope. 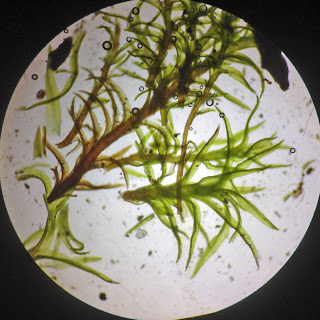 Perhaps the most prominent species was Common Liverwort Marchantia polymorpha subsp. ruderalis, which was abundant between the cobbles at the base of the building along with other species of general interest such as Rigid Beard-moss Didymodon rigidulus, Spiral Extinguisher-moss Encalypta streptocarpa and Wavy Beard-moss Didymodon sinuosus.  A more methodical search would certainly produce a longer list and maybe a few more surprises.
Posted by Barry Stewart at 18:39 5 comments:

Thanks to Nigel, I have entered the B terrestris onto the BWARS recording scheme.  Unknown to me there is a specific winter Bumblebee recording scheme that other folk may want to use.  The link is : http://www.bwars.com/index.php?q=content/submit-sighting-winter-bumblebee.  It doesn't take long to fill in!

The Bumblebee from a previous post was out again today, despite an air temperature of only 8 degrees.  Hopefully these pics allow a better id, and using the Natural History Museum bumblebee key here: http://www.nhm.ac.uk/research-curation/research/projects/bombus/key_british_colour.html I would say it is possibly Bombus terrestris. 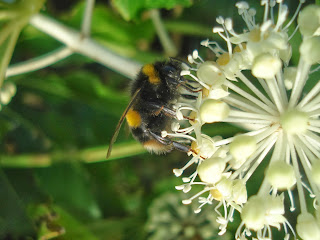 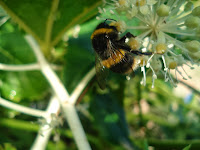 If Nigel happens to be reading this, do you agree?
Posted by Adam Mantell at 10:54 5 comments:

Another day in the garden

I posted a little while ago about the insect activity on the Fatsia japonica bush in my garden, see here: http://eastglamwildlife.blogspot.co.uk/search?updated-max=2013-11-18T23:17:00Z&max-results=7.  Today's warmer sunny weather once again brought out a lot of insects (for the time of year!) looking for nectar.

There were 4 species of  hoverfly, Eristalsis tenax (Drone Fly) the most common (about 20 or so at any time), a few Scaeva pyrastri with their very distinctive white comma shaped markings, a couple of Episyrphus balteatus (the Marmalade Fly) which can be identified by the double black bands on each tergite, and a fourth species which I didn't manage to id unfortunately.  Both S pyrastri and E balteatus are often migratory species which breed in the UK.  E balteatus is also notable for variable colour.  Darker specimens mean the development of the larval stage was in relatively cool conditions, and sure enough the specimen below was comparatively dark.


There were many species of other Diptera, most of which I could not begin to id, but there more obvious, and strangely photogenic were Flesh Flies, Blue-bottles and Green-bottles:


There were also quite a few Yellow Dung-flies (Scathophaga sp).  I gather these are normally predatory on other insects, but in this instance it appeared to me that they were nectaring rather than hunting.

On my way over the hill between Maerdy and Aberdare, I stopped for lunch at a place called Cefnrhos-gwawr and before moving on, took quick a stroll. In a small pool, where water was draining from a bog, across a seldom used forest ride, I saw what I at first took to be pond skaters, but with quite a striking pattern on the abdomen. I took a couple of poor photos and at home, identified them as Water Crickets (Velia caprai). They are, apparently common and I've certainly seen them before, in various places, though there are only eighteen records from three sites on MapMate.
They have a preference for running water, while pond skaters prefer still water.

Please excuse the poor image. I had to blur out the dazzling reflection of the flash, to the left of the subject.

Finishing a job a little earlier than expected, I took the opportunity to visit my local country park, to look for Cobalt Crust fungus (Terana caerulea). I searched for the couple of hours available, but failed to find any. However, the visit wasn't in vain as I came across a Kidney-spot Ladybird clamped down on a fallen Sallow branch and on another Sallow branch I discovered groups of slime mould sporangia, though of what specific slime mould I don't know.

Our Vitis 'Brant' grapevine produced a huge crop this autumn. We harvested most of it but left some for the birds - so far only Starlings have taken advantage, with small flocks plundering the grapes on a regular basis over the last week or so. 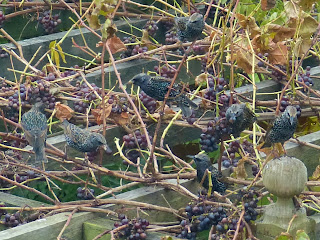 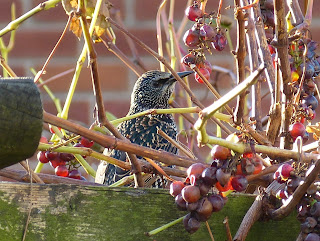