This morning, whilst trimming mother-in-law's box hedges, a fresh male Clouded Yellow bumbled across her garden. Garden backs on to Porthkerry Park, so right next to coast. Several Holly Blues were also around the woodland edge. This is only my second Clouded Yellow this year, the first being on Ogmore Down in early June during our High Brown Fritillary habitat surveys.
Posted by Richard Smith at 13:31 5 comments:

Several of this species of Weevil arrived in my moth trap recently and caught my eye because of its very distinctive elongate and curved rostrum. Having done a bit of research, it is an Acorn Weevil, Curculio glandium.  The female uses the long rostrum to bore into the centre of an acorn to lay her egg. The larva feeds within the acorn and eventually bores its way out.  This species can be separated from the very similar looking C nucum (the Hazelnut Weevil) by the detail of the end 3 segments of the antennae.  For such an ungainly looking creature it is a very adept flier!

According to the NBN gateway it is relatively common in the southern half of Britain, but there are comparatively few Welsh records.  I'd hazard a guess it is under-recorded though!

A leaf hopper for a change

I caught a specimen of the stunning little leafhopper Aguriahana stellulata in my garden moth trap this week. I didn't get a photo but there are some nice ones on the British Bugs website here.

At first, I got excited thinking this was a Leucoptera moth, which would have been new for the garden. It was only when I got the tiny specimen under a hand lens that I realised it was a bug. The similarity between these unrelated insects is quite striking, see here for a photo of the moth. Which begs the question, does one species mimic the other, or is this a case of convergent evolution, i.e. there is something advantageous about this particular wing pattern?

First posting on this blog.

Lots of bees in my garden in Creigiau at the moment. In particular, whilst slumped in the shade, I noticed one taking cut leaves into a drainage hole in a window frame on the back of the garage. I assume this is a Megachile sp. Leafcutter Bee. This behaviour continued throughout the day, although it obviously found it difficult squeezing through the slot carrying the leaf segment. Should I be worried that it is nest building here? 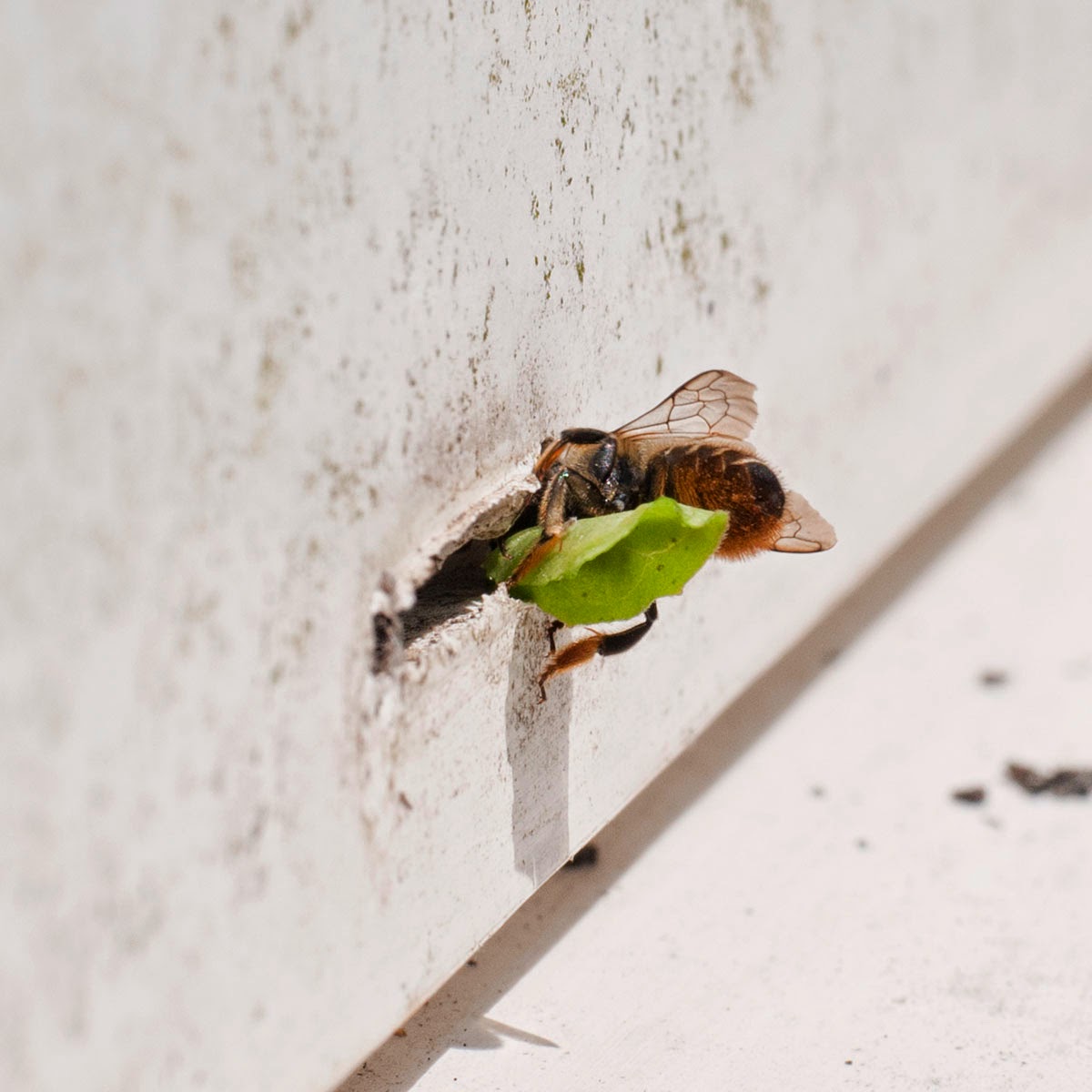 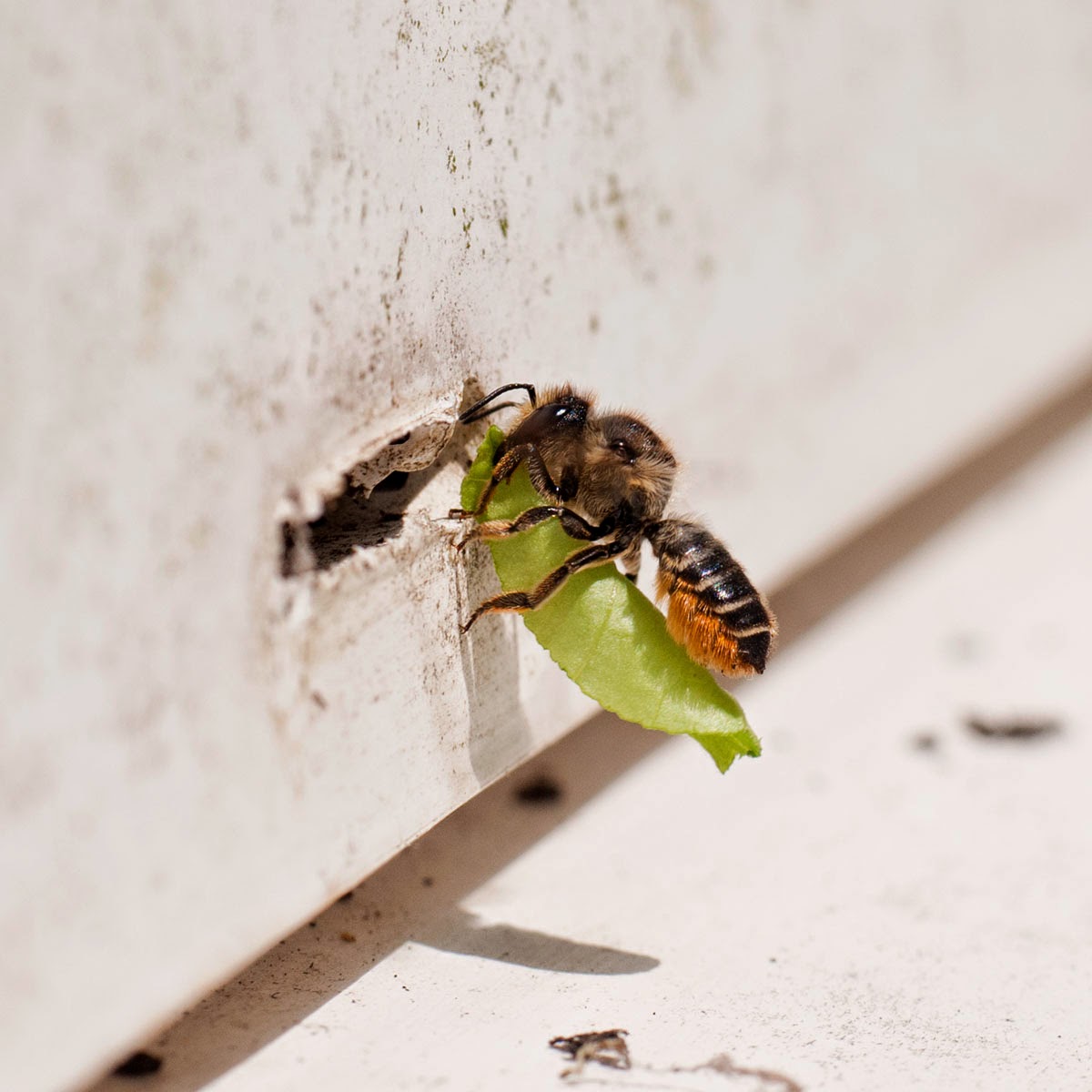 Amongst the Buff-tailed Bumblebees and various hoverflies, I also noticed a lot of these - is this a Honeybee? 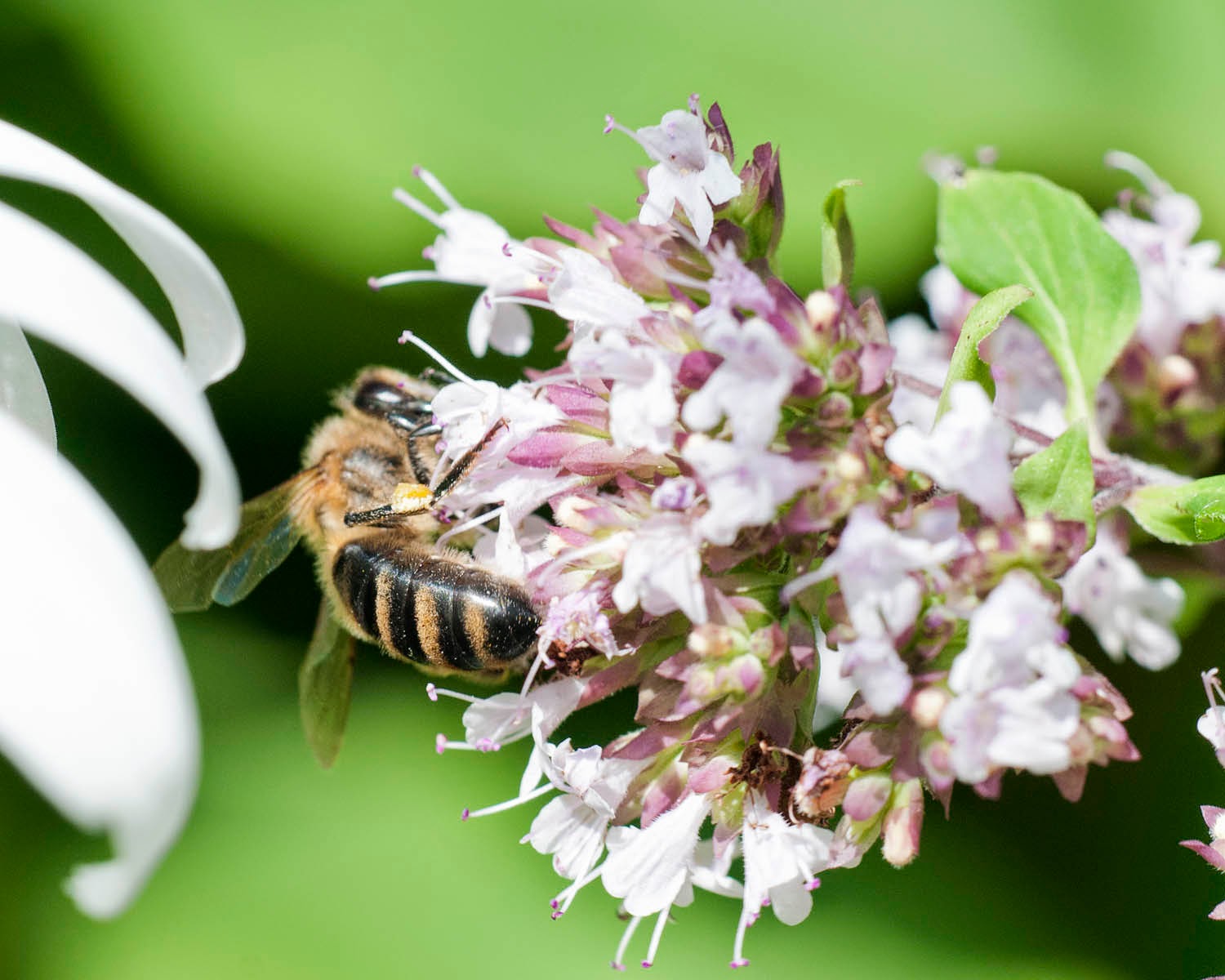 After 10 years absence, it was great to take Emma Douglas and Ben Williams to a very special site near Blackmill last July. Purple Hairstreaks live & breed entirely on oak trees, with adult butterflies occasionally settling on nearby ash and bracken. Being a tree canopy species they are very easily overlooked, so a site with two dozen mature oaks along an east facing slope with a public footpath along its western side gives unique opportunity to view the butterflies from above or at least straight on.

Between 4.15 & 5.45 on Wednesday and between 6pm & 6.45 yesterday, there were roughly 3 to 4 males per tree on at least half a dozen trees, regularly battling for position on the western lower branches of these impressive oaks bathed in late sun. All the hairstreaks were in good condition, although willow warblers and great tits were prowling. If you follow the westbound Ogwr Ridgeway Walk from Blackmill, after an initial steep asdcent, it contours and heads south. There are ant nests on the ground beneath, from where these hairstreaks may have emerged as butterflies last week. Next week onwards should be good viewing. once females also widespread.
Posted by Richard Smith at 09:06 No comments:

One of the problems with trying to identify caddisflies from the moth trap is that the good caddis nights tend to coincide with the good moth nights, and when the moths are numerous the caddis then tend to get forgotten. I managed to identify most of the caddis caught in the garden trap up until May this year, but since then I've only retained distinctive-looking species and let the rest go.

The Moth Night event at Bryngarw Country Park turned out to be a bit of a slow moth night so I collected a couple of caddis, shown in the photos below.

The notches on the antennal segments of Odontocerum are distinctive (click on photo to enlarge).

The first antennal segment of Lepidostoma is long and hairy. There are two species in the UK but hirtum is the commoner of the two.

Both Odontocerum and Lepidostoma occur in stony rivers and streams. My traps were placed close to the Afon Garw so their presence at the site is not entirely surprising.

I recently made a return visit to Mynydd Ruthin southeast of Pencoed (which I had visited back in April on a Glamorgan Botany Group excursion), primarily to see if I could find a patch of Dropwort (Filipendula vulgaris) reported by Rob & Linda Nottage on 11 June.

With an approximate location to hand, and Bracken having grown up to a remarkable extent since our earlier visit, it took me a little while to locate the spot, but after half an hour or so I got lucky! Spreading over 50cm x 50cm, the stems were remarkably tall (about 60cm), and towards the end of flowering. In retrospect it was actually quite an obvious place for it to be, as on this part of the site there was no Bracken, and not far away there were a couple of other otherwise-absent calcareous indicators, including Salad Burnet (Poterium sanguisorba), Wild Thyme (Thymus polytrichus) and Long-stalked Cranesbill (Geranium columbinum).

This is only the second confirmed site of Dropwort in Glamorgan, with the other record having been made at Oxwich Point in 1997 - so well done to Rob and Linda for finding what appears to be a good native locality.

On a non-botanical note, on my way round I did spot an Emperor Dragonfly (Anax imperator) resting on a Bracken frond. Amazingly, it sat there patiently while I got my camera out, before flying off. Better than my effort at the Dropwort, I hope you'll agree!
﻿

As the sun came out briefly this afternoon, I cycled quickly down to the Taff in Llandaff to check a Wych Elm tree for White-letter Hairstreaks. I've been eyeing this tree up for a while, but this is the first chance I've had to look properly during the flight season.

After 5 minutes of nothing, there was suddenly a burst of activity with two individuals (presumably males) chasing each other rapidly around the tree top. A third individual was briefly involved. The spectacle continued on and off for several more minutes before they settled down again.

Predictably, all the hairstreaks stuck resolutely to the canopy and had to be viewed through binoculars. The distant shot below was the best I could do!
As Richard mentioned in a previous post, the flight season should last for several more weeks, so worth checking any Elms growing in sheltered situations - it's a very under-recorded butterfly in Glamorgan.
Posted by GMT at 20:46 No comments: