Sorry Mark I can not help you with the fungi but here is something else that is attacking the oaks. Found on a small Pedunculate oak at Lavernock NR last Sunday a Knopper gall, there were alot of acorns affected. 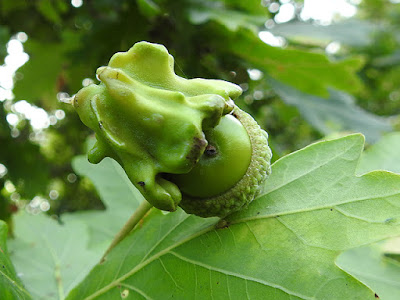 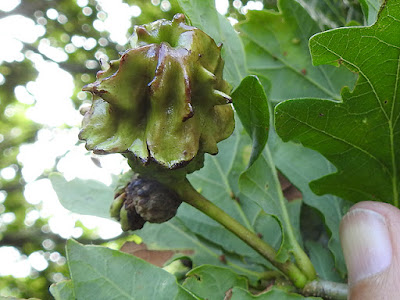 Considering what attacks these trees in total it is a wonder they survive.
Posted by Mike Thornton at 10:24 1 comment:

Last Sunday, while on a general 'see what I can find' walk, I came across this rust on the cups of some immature acorns; on the lower branches of a youthful Sessile Oak.

I took a specimen, as I always do with rusts and microfungi and yesterday, with nothing better to do on such a terrible day, I got the microscope out to examine and measure the uredospores. The only rust to be found on oaks in this country is Cronartium quercuum (syn. Uredo quercus) and according to the three handbooks I have (see below), which describe this rust, it is found Hypophyllously (on the underneath) of the leaves of the sucker growth or young coppice growth of oaks. None of the books mention it occurring on the acorn cups.

Under the microscope, the uredospores looked quite variable in size and shape, many being very asymmetrical, with a broadly rounded end and a more or less acutely rounded end. The latter end often had the remains of the pedicel still attached. These spores tended to be the smaller and had the thickest walls.
The other spores were generally larger and more symmetrical, but still with a wide variation in shape and had thinner walls. Both types were covered in a fine, short spination (echinulate) and although the spore walls were colourless (hyaline), the contents were yellow: though in the case of the larger, more symmetrical spores, there was one or more circular pale areas within the yellow mass of the contents, as can be seen in the photos below (apologies for the poor quality).

So far so good; but when I compared these measurements with those given in the books, there was an immediate problem: mine were far too large.

According to Malcolm Wilson and D.M.Henderson, in their standard work "British Rust Fungi" the uredospores should measure 15-25 x 10-17 microns, with walls 3 microns thick. They do, however, mention an American species, as they call it, though it may be just a form, which has spores which measure 20-32 x 15-20 microns; closer to my spores, but still smaller, A Japanese form or species they mention, has spores intermediate in size between the two.

A.J. Termorshuizen and C.A. Swertz, in their book "Roesten van Nederland" (thankfully bilingual) give the spores as measuring 20-32 x 14-20, with the wall 2-3 microns thick.

Martin. B. Ellis and J. Pamela Ellis in their book "Microfungi on Land Plants. An identification handbook" Give the spore size as 15-25 x 10-18.

The uredospore sizes given in the above books agree most closely with the measurements of the smaller, asymmetrical spores from my specimen, but in that case, what about the more symmetrical, but apparently oversized spores, which made up at least half of the spores taken from the specimen?

I returned to the tree this afternoon, to collect a specimen of uredosori on a leaf, to see if the uredospores from them would be more typical, but search though I did, I could find absolutely none on any of the leaves.  I think I am going to need help with this one.