At a site, in the mid Cynon Valley, this afternoon, I was photographing the apothecia of the lichen Xanthoria parietina, which appear to be host to a lichinocolous fungus (possibly Lichenoconium xanthoriae), I noticed another yellowish lichen on a nearby branch of the same tree and immediately recognised it as the rare (for Wales, anyway) Teloschistes chrysophthalmus, or Golden-eye Lichen.
In autumn 2015, the first record of it in Wales was made further up the Cynon Valley, though not by me and since then I have been keeping my eye open for it.
Strangely; straight after the first discovery in 2015, I went on holiday to Dorset and accidentally found it on Winfrith Heath nature reserve. It isn't quite so rare down there, but it was a first for the reserve.
The position of the first site is being kept secret, as these foliose lichens on trees are very vulnerable to accidental damage, so I will not divulge its location here. As far as I am aware, this is only the second record in Wales, though hopefully someone will put me right on that.

Sorry about the photo. The camera was on a tripod, but there was just enough breeze to gently move the tree as I tried to photograph it.

Two visits this month - the first on 02 December, which I am confident is Opilio canestrinii, and the second on 16 December. I'm not really sure about the second one - it looks like an oddly coloured O. canestrinii, but not sure. Would appreciate confirmation/correction for this one.. 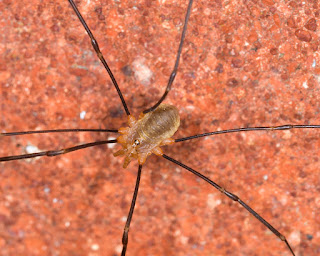 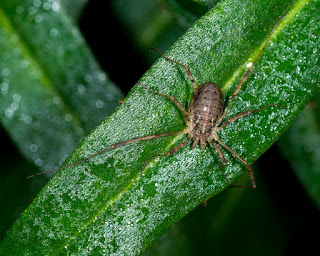