frog spawn (?) and a leech on the garden decking

With all the rain we've had the decking has occasionally held water at one end but this eventually runs away. I moved some pots yesterday and found this lump of, what looks like, frog spawn on the decking behind a pot. I don't have a pond but have occasionally seen a frog around the garden, so is it ok to move this to the local 'frog pond' ? 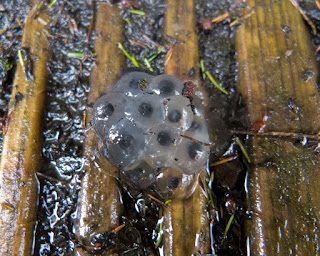 Under the pot I found what I assume to be a leech. Contracted it was about 1/2 inch or so, but stretched to at least 2 inches. 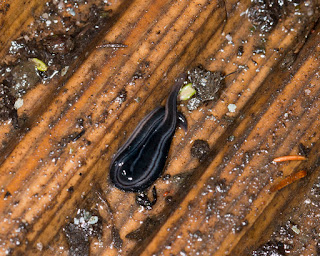 On a more colourful note, I saw my first Marmalade Hoverfly of the year and managed to get a picture of a Buff-tailed Bumblebee sunning itself on the fence. 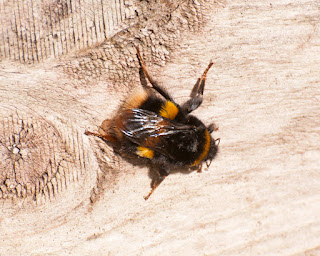 I have been looking around for a particular rust fungus which affects the diminutive fern, Wall Rue (Asplenium ruta-muraria), to be found quite commonly on old walls quite widely, as well as on limestone.
Having observed recently, that all the fern rusts (Milesina Spp.) seem to be having their season, I thought I would check any Wall Rue I came across, looking for the tiny whitish spore masses so characteristic of the genus Milesina (who says rusts have to look rusty?) and on the first plant I looked at, there they were. A couple of days later, I happened to notice a plant growing in an old school wall, as I walked past. I turned a frond over and there were the tiny white spots. I have since found it at a third site (I have only looked in three sites), so although M. murariae is described as rare, it is probably just uncommon and overlooked, just like a lot, if not most so called rare microfungi.

If you want to give the fern rusts a go, then now is the time to get the hand lens out and start looking under those manky looking fronds.

Postscript: The Milesina on Dryopteris filix-mas, above, did indeed turn out to be M. kriegeriana.
Posted by Mark Evans at 15:03 2 comments:

Finally dry enough to make a start on preparing the flower beds for the coming season.

Lots of Ground Beetle larvae in the flower beds and found a couple of (what look to be) White-legged Snake Millipedes under some plant pots on the decking. Digging in the raised beds disturbed a number of fast moving centipedes which looked to be of at least two different species - I managed to catch one of each for a closer look. Similar in colour but the first was approx 20-25 mm long with 21 pairs of legs, possibly one of the Cryptop species, whilst the other was 65-70mm long with 80 pairs of legs - not sure but, from the length and legs, this could be Stigmatogaster subterranea.

Also found this little beastie on the window. I think it is a Limonid Cranefly, and, with the dark stigmata and black bands above the knees and the green underbody, it could be Dicranomyia chorea. 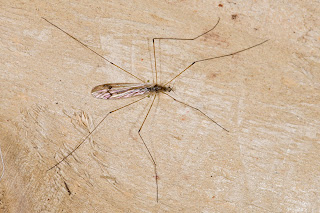 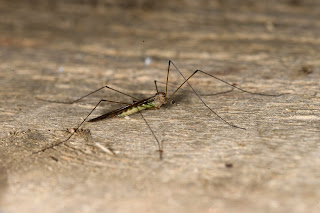 Visiting a favourite little wooded valley of mine, near Llwydcoed, this afternoon, I found Milesina Sp rusts on several ferns, so anyone wanting to find rusts on ferns should take a look now, as they seem to be coming into their own at the moment. Although I have my suspicions about a couple of them, I won't know their identity for sure until I have the chance to get them under the microscope.

While there, in the warm sunshine, I saw my first Philopotamus montanus of the year. This caddis is very distinctive and is the only one I am confident enough about to record. Because it is on the wing so early and is such a beautiful thing, it is one of my favourite insects. 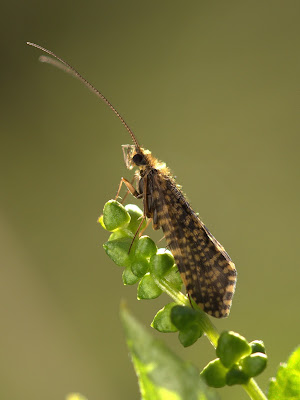