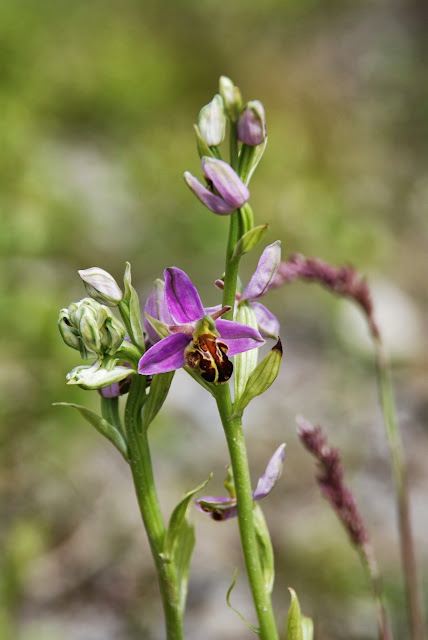 Bee Orchids, (Ophrys apifera) have been recorded in the past from Rhoose Point, but I hadn't seen one until the Bioblitz we held in July this year.  I took this snap of a stunning flower.

The blossom bears a resemblance to a feeding bee.  What is less well known is that it also smells like the bee with which it co-evolved.  Unfortunately for the Bee Orchid, the right species of bee is not present in this country so plants are self-fertile here.

The seeds are very small and produced in the thousands.  They are so tiny that they can be blown for long distances on the wind.  It is not uncommon to find them popping up in quite unexpected places, often in disturbed ground with calcareous soil.

The distribution map shows that they are well distributed across most of lowland England and Wales, and is one species that may be expanding its range northwards.