Whilst out on the obligatory Boxing Day stroll I spotted a spider from the Tegenaria family that was lurking under a stone in a nearby abandoned quarry.  There are about 10 species of Tegenaria found in Britain, and they include the big scary hairy House Spiders that seem very fond of arachnophobes in the autumn when they move indoors to escape the inclement weather.  They are quite distinctive looking as a groups, but like many spiders are impossible to separate on the basis of pattern or colour.  It is necessary to look at the male palps or the female epigyne under a microscope.

This one was not one of the commoner species such as the familiar House Spider, but Tegenaria agrestis. 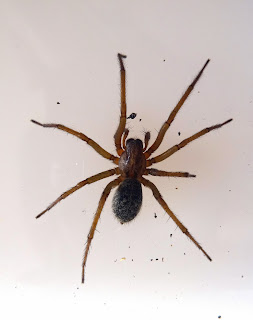 It was first recorded in Britain in 1949 and prefers disturbed brownfield habitats.  It is a widespread European species and has a wide but patchy distribution across  much of England but there are comparatively few records from Wales.  Glamorgan records are restricted to a couple of sites to the West of VC41.  It is thought to spread along railway lines, using the track-side ballast as an ideal habitat.  Sure enough, the abandoned quarry south of Rhoose village is less than a hundred metres from the Aberdare to Bridgend line that services Aberthaw power station.  It is quite likely to be present in other areas of suitable habitat along the railway corridor I guess.