Following a recent exchange of emails with Emma Williams, on the subjects of Slime Moulds and Zygomycete fungi, I was reminded of something I found back in 2012. I was photographing some caps of Panellus serotinus, which were growing on a rotten Sallow log, when alongside them, I noticed a strange looking organism. A closer look and it appeared to be a withered fruiting body of P. setotinus, with lots of fine, branching filaments radiating from it and giving it a spiny appearance. 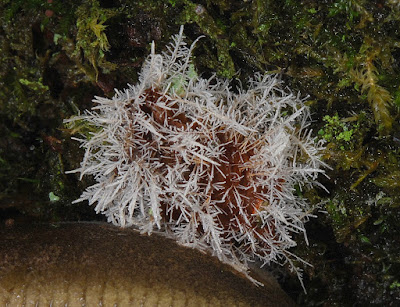 After photographing it I carried on with the Panellus and found another shrivelled cap, with the same fungus growing on it. I sent the photos to Mervyn Howells, who concluded, as I had, that it was a microfungus of some sort and because I wasn't into microfungi then, so it was left at that, but now, I really want to know what it might be. I have searched online, using all the combinations of search terms I can think of, and found nothing remotely like it, so I am posting the images here, in the hope that someone can give me a poke in the right direction. 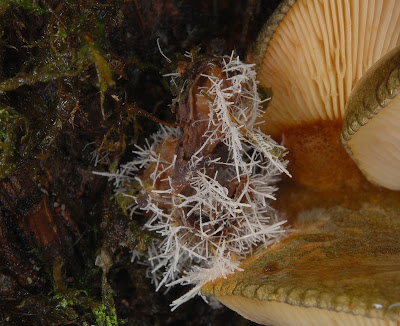 I seem to recall that it reappeared the following autumn, so this autumn, I will check it out and if it is still there, I will collect a specimen for microscopic examination.
Posted by Mark Evans at 10:22