A breezy but pleasant stroll in the afternoon sunshine along the coast at Gileston turned up this very distinctive beetle lurking under a stone.

It is a Bloody-nosed Beetle, one of the largest of the Leaf Beetles (Chrysomelid) beetles in the UK; this one was just a little short of an inch long.  It is apparently quite common, although I have not seen many before, but it does seem to have a strongly coastal distribution in Wales at least.  The larvae feed on Bedstraws and Cleavers

Like many insects it not only uses its strong exoskeleton for defence, but also has chemical weapons in its arsenal.  The common name is a bit of a hint here!  If you gently breathe on the beetle it instantaneously triggers the production of a red irritant liquid from the mouthparts which you can clearly see in the pic below. 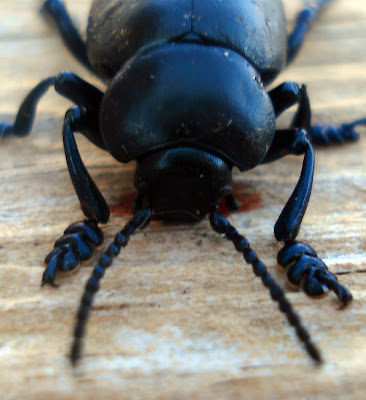