We've recently see a large influx of moths into the UK from continental Europe.  The best County sightings are here and here, in the west of Glamorgan.  We've also had some in the east of the County, and last night this Vestal Moth arrived in my garden. 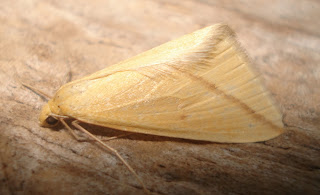 The colours of Vestal moths are influenced by the temperature at which the larvae developed.  Larvae from hot areas are brighter in colour with a strong pink or red cross-line on the wing.  Duller colours and a faded looking brown cross-line mean cooler temperatures so it is likely this individual came from further north in Europe.

Radar studies have shown that some Lepidoptera like Painted Lady butterflies and Silver Y moths migrate into the British Isles each year as temperatures warm up in the summer, and then move south again as autumn arrives.  It is likely that smaller species are simply caught up in turbulent air currents and can be carried very long distances.
Posted by Adam Mantell at 19:25