Last weekend, I finally got around to confirming the identity of an Elf Cup; or to be precise, two Elf Cups. The first was the Green Elfcup, featured in my previous post, because under the common name of Green Elfcup, there are two species; Chlorociboria aeruginascens and C. aeruginosa. In the field, they can't be reliably separated, but fortunately, the spores of the two species are sufficiently different in size, to make a determination based on measurements taken through a microscope at high power.

Obtaining a spore sample without the cup drying out was a bit tricky, as it was very thin fleshed and insubstantial, but I managed it by placing a clean microscope slide on a 100cm square (approximate) of kitchen foil, placing the fresh cup (apothecia) upside down (cup opening down) in the middle of the slide, covering it with a piece of moistened kitchen towel, just large enough to cover the cup itself, and then carefully folding the foil over the whole, taking care not to crush the cup in the process. It was left overnight and by the following morning there was a thin white spore print on the slide, which I gathered together a little, with a razor blade, before adding a drop of water and a cover slip.

The measurement was straightforward and several spores were measured, both in length and width. The result was that all the spores measured fell comfortably into the size range of the spores of C. aeruginascens. Result!

Next was a specimen of the Scarlet/Ruby Elfcup duo. Since finding out that there were two species: Sarcoscypha austriaca (Scarlet Elfcup) and S. coccinea (Ruby Elfcup), which cannot be reliably determined in the field, I have wondered which one we have, if not both. I initially learned that they could be told apart by the examination of the hairs that make up the whit tomentum, which coats the outside of the cups (apothecia), austriaca having distinctly curly hairs and  coccinea having straight or wavy hairs; visible only under the microscope. However, over the years, I have examined the broken edges of pieces taken from the apothecia, using just a x20 hand lens and have seen unmistakably curly hairs. I have since found out that to be absolutely sure, the spores also have to be examined, so as with the Chlorociboria, I placed the cup I had collected upside down on the centre of a microscope slide and wrapped it in foil, but omitting the moistened kitchen towel, as the cup was far more fleshy.

It was left overnight and by the morning a plainly visible white spore print was visible on the slide, when the cup was removed.


Once more, I concentrated the spores into a smaller area of the slide, with the aid of a razor blade and added a drop of water and a cover slip.

Before examining the spores, I scraped off a small specimen of the tomentum and placing it in a drop of water, stained with Gentian Violet, on a slide, I teased it apart, before placing a cover slip on it and examining it under the microscope. Even at x40, the curly nature of the hairs was obvious. 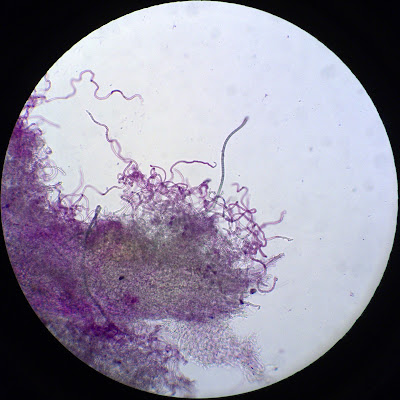 I next turned to the spores and under the microscope, the spores were fairly large and easily seen, even at x100.


Immediately noticeable was the shape of the ends of the spores, most of which were rounded, but many of which had characteristically squarish ends. Of the two species, only austriaca has these square ended spores, coccinea having only rounded ends. The square ends made it almost certainly austriaca, but the clincher was the presence of a small handful of spores from the ends of which were budding more spores. Only S. austriaca does this, so in this instance I could record Scarlet Elfcup.