I was bought a copy of the FSC's British Plant Galls (2nd edition), by Redfern & Shirley, as a birthday present in November 2015. Since then I have made good use of the book - not by specifically hunting for galls but just by keeping an eye out for them while out and about in the countryside, then bringing home samples for identification. I have to say it is one of the most useful guides I've bought in recent years and at £28 is excellent value for money. 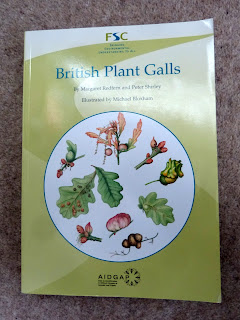 This price tag might sound a bit steep, but the book runs to 432 pages and contains around 300 keys. These are organised by host plant genus and contain useful line drawings to help separate the species; there are also some colour plates of the more common species at the back of the book.

I have found that in most cases it is relatively easy to key out a gall to species level, assuming you have collected a specimen. It is sometimes necessary to open up the gall to view the contents, but in many cases the external appearance of the gall will suffice. However, some mite galls are very tricky to identify (gall mite taxonomy appears to need further study) and oaks and willows both support a huge number of gall species, which can make identification rather taxing.

Looking at galls has also given me an introduction to the fascinating biology of gall-causers, some of which, like rust fungi and aphids, have alternating generations on different hosts at different times of year. I was surprised to learn that the wasp responsible for the familiar oak apple, Biorhiza pallida, also has a non-sexual (agamic) generation on the roots of oak trees.
So far I have recorded 56 gall-causing species, comprising a mixture of mites, fungi, wasps, flies, moths and psyllid bugs. Nearly all of these are common and widespread species, though there has been at least one notable record - the ramshorn galls I found on oak at Hailey Park in Cardiff, caused by the wasp Andricus aries, appear to be only the second record for Wales and the first from the SEWBReC area.
More recently, I was pleased to find some 'pocket plum' galls close to my home in Llandaff North. These form on the developing sloes of blackthorn and are caused by the fungus Taphrina pruni.
I'd certainly recommend galling as a fruitful area of study.
Posted by GMT at 11:42