The beetles in Mark's recent post prompted me to blog about a couple of species I saw today in Cardiff. For a change, these are relatively easy to identify.

The first is this Garden Chafer, Phyllopertha horticola, which was flying around our garden in the sunshine this morning. This is actually the first time I've seen it in a garden! 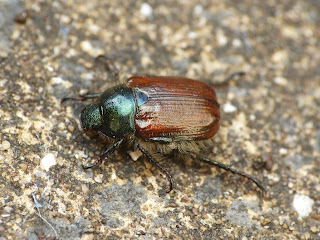 The second is the nitidulid beetle Soronia grisea, which was sat on a gooseberry leaf in a small block of woodland at Hailey Park. There is another, less common, species in the same genus, Soronia punctatissima, but that species is apparently darker in colour and the sides of the pronotum (thorax) are a different shape. 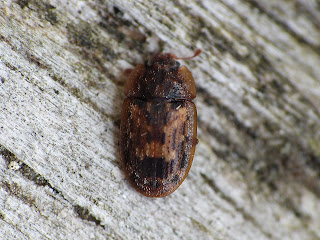