A weevil new for Wales

A couple of weeks ago I was in town for the Roald Dahl celebrations, which were fun but hectic - I've never seen the city centre so packed with people. While we took a breather in Bute Park I spotted some unfamiliar mines on one of the narrow-leaved willows (possibly Salix fragilis) growing near the castle. 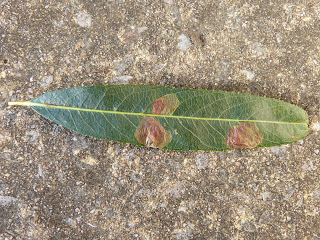 On checking the leafmines.co.uk website back home it became obvious they were the work of one of the Isochnus weevils, but the website told me there are two species on willow which are indistinguishable on mine and larval characters. I emailed Rob Edmunds, who runs the website, and he said the adults are easy to rear - just wrap the leaf petiole in damp tissue and leave in a pot til they hatch. It didn't take long...this week two adults emerged and I was able to confirm, using Morris' RES keys, that these are Isochnus sequensi. 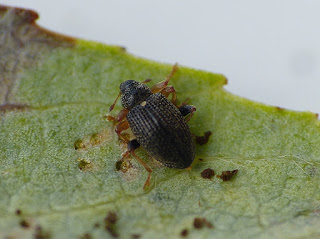 This species was not listed on Adrian Fowles' weevils of Wales online checklist (see here). I emailed Adrian and he has now confirmed this is the first record for Wales of this weevil, which has a mainly eastern distribution in the UK.
Posted by GMT at 06:56