On Saturday morning, while checking the underneath of my garden moth trap for stowaway moths, before putting it back in the shed, I noticed a small (body length about 6-7mm) colourful spider. It was very camera shy, but as I was photographing it, the cream coloured band around the front of the abdomen told me it was one of the Steatoda Sp. As far as I can tell, it is S. grossa, but I would welcome any thoughts on that. 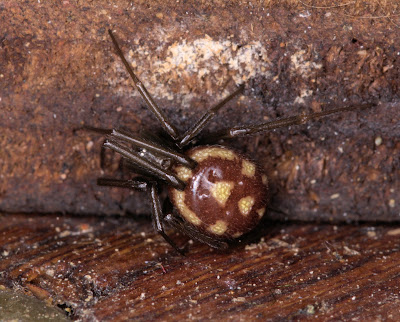 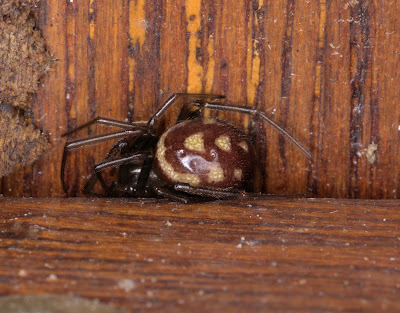 I live at 270m ASL, in the northern valleys and although I have heard rumours about false widows being all over the place, I have never encountered any; either at home, or while doing my job, as a gardener and suspect that most local reports are misidentification of the window frame spider Zygiella x-notata.

Last November, I spent a week at a holiday home in Lyme Regis, Dorset. I was amazed, while there, to see that every nook and cranny in the exterior of the house, garage and garden structures was occupied by spiders of the Steatoda genus; some quite large. I thing most of them were Steatoda nobilis, but S. grossa may have been present too and I now wonder whether I may have inadvertently brought one or two back with me and introduced them to my garden.
Posted by Mark Evans at 09:49